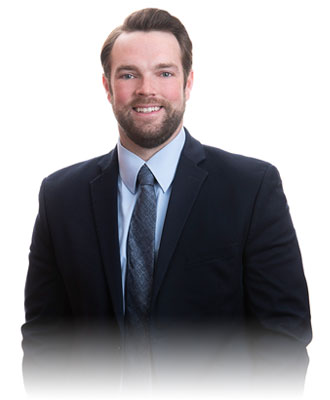 John has experience with both criminal and civil law. He practices in a number of areas of the law including criminal law, family law, landlord/tenant disputes, estate planning and general civil litigation. Additionally, John has extensive knowledge of expungement law in Minnesota.

John grew up in the Milwaukee area. He attended the University of Wisconsin-Madison where he graduated with a degree in economics. Upon graduating, John moved to Minnesota and attended William Mitchell College of Law.

Prior to joining Miller & Stevens, John was a trial attorney with the Neighborhood Justice Center. In his nearly four years there, John handled cases of all types from misdemeanor DWIs and domestic assaults all the way up to felony murder cases. In addition to negotiating hundreds of resolutions for clients, John handled multiple trials and got not guilty verdicts on felony domestic assault charges and an assault with a dangerous weapon charge.

With Miller & Stevens, John continues to represent his work as a criminal defense lawyer, but also litigates in other areas of the law as well. John is licensed both at the state level and the federal level in Minnesota State Court and the District of Minnesota. When he is not in the office, John enjoys spending time with his family and staying active. John enjoys golf in the summer and playing hockey in the winter.